design and coding by iCAREdatatools © 2006 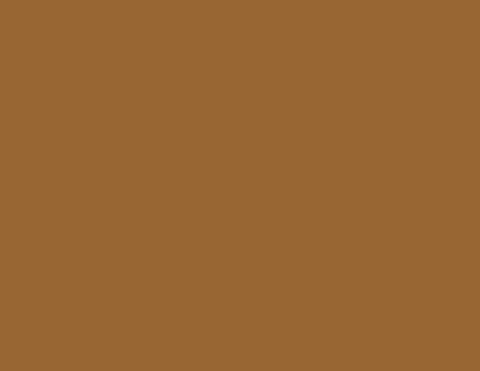 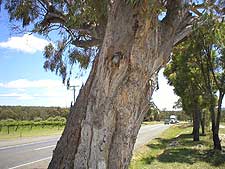 The large Red Gum framing the entrance to the highway vineyard highlights the importance of our sustainable agricultural practices. In 2006, this one 300 year old Red Gum (Eucalyptus Blakeii Blakeley's), supported three different species of bird. In one branch hollow a young Kookaburra was raised, in another a pair of Galahs was reared, and higher up in a nest, a pair of young magpie grew. This one tree attests to the efforts made by Kominos to farm sustainably.

Over 40% of Kominos Wines land area has been preserved as wildlife and natural ecosystems. No land has been cleared by Kominos Wines since acquiring both properties over 22years ago. Only previously cleared land has been planted. On the highway vineyard, the reparian habitats bordering back creek which flows through the vineyard has been fenced for wildlife preservation. This intermittently flowing stream has several rock pools which are habitats for water dragon, native white tip water rats, yabbies and native fish. Common reptilian wildlife includes water dragons, red belly black snakes and eastern brown snakes. 400m after this stream leaves our property it enters the larger Severn River where shy platypus are known to dwell. 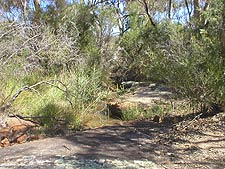 Rock Pool on BACK CREEK
at Kominos Wines

A family of six eastern grey kangaroo resides in this wildlife corridor along with echidna and common brush tail possums. While we are yet to sight platypus on the property they have been sighted 100m downstream where Back creek joins the Severn River.

Protecting our natural habitat alongside our farming land has been an important philosophy in the development of Kominos wines.

Our back label has a platypus logo .This logo while uniquely Australian also is representational of the many wildlife species respected by our tailored vineyard farming practices. Pesticides are used only rarely and soils are not cultivated to protect them from the erosive force of high intensity storm rainfall. We use sprays of vegetable oil to control some diseases such as Powdery Mildew.

All vineyards have been planted on land cleared before our arrival. No clearing has been undertaken since 1984 on our highway vineyard and since 1976 on the Ambeli vineyard. Both vineyards represent different ecosystems and confer different benefits to the varieties planted. On our highway site, with an above sea level elevation of 790m, we grow later bud burst Cabernet Sauvignon. In early spring, cold air drainage can mean more late frosts. Here we have planted varieties which burst up to four weeks later than early bud burst varieties.

Our Ambeli vineyard with an elevation of 850m above sea level is one of the highest commercial vineyards in Australia. With its excellent cold air drainage we have planted our early budburst Chardonnay variety and Chenin Blanc. 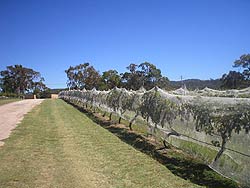 Bird Netting before harvest, at
Kominos Wines
By tailoring grape varieties to the natural environment we are less often forced to engage in farming practices which may impact on the land we farm. For example if we grew earl bud burst Chardonnay on the Highway site 790m ,we would require more vineyard cultivation in early spring as exposed soils reradiate heat and provide more protection during frost prone nights. Instead we grow chardonnay on the Ambeli (850m elevation) and leave year round grass swards to protect soils from storm erosion. Modern biologists have also adopted the nomenclature Gaia to describe the Earth's biosphere.

Mother earth and good health are intertwined according to the ancient Greeks. The greeting Gia Sou written

?means "To your ?good health" and derives from the Greek name for the ancient Greek goddess mother earth Geia or Gaia This Greek greeting embodies the relationship of Mother Earth with good health. By sustainably farming mother earth we are protecting our own health.

The benefits that are arising in studies are apparently derived in two principle ways. Firstly wine alters the ratio of HDL cholesterol and LDL cholesterol in the circulatory system of many moderate consumers in a positive way leading to less circulation attributed problems.

Secondly it has been recently established that one particular compound found in grape skins, Resevertrol has protecting properties against forms of cancer. Resevertrol appears to play a role in plants as a natural UV filter in plants. While Resevertrol is found in other plants such as cherry tomatoes and brown onions its availability particularly in red wines is another revelation favouring moderate in consumption.

The logo of the Australian wine industry is Enjoy wine in moderation. The ancient Greek philosopher Socrates implored Pan Metron Ariston which translates as all things in moderation

means "Greetings", "Cheers", "To your ?good health" and derives from the Greek name for the ancient Greek goddess mother earth Geia or Gaia. So the greeting is also saluting "to mother earth'. . This Greek greeting embodies the importance of the connection between what Mother earth produces naturally and sustainably and your good health. Good health and Mother Earth are intertwined.